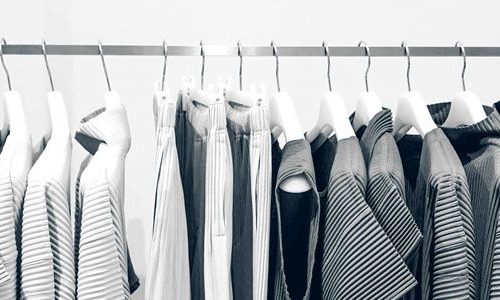 Smart clothes text their owner asking to be worn:

I think it’s fair to say that all of us have got some items of clothing which are currently languishing in our wardrobes which haven’t been worn in a long time, gathering dust, waiting for the day that we decide that it’s time to pull them out and wear them again.

New technology, however, is currently being developed which could soon put an end to this, with the garments themselves being given the power to give their owners a subtle reminder that they still exist and they’re still waiting.

If these alerts are ignored by the owner, the garment won’t just go away either – instead, it can get in touch with a clothing charity and actually ask to be recycled, where an organisation can then send donation information to you. That’s not all – the clothing can also be programmed to list itself on eBay!

As a society, we now own 4 times as many clothes as we did two decades ago, but we only wear roughly 20% of the clothing that we own on a regular basis. This has led to academics at Birmingham City University to begin developing the ‘connected wardrobe’ with the idea of encouraging more ethical clothing consumption.

This idea will see garments being tagged using a brand new. washable technology, which is known as radio-frequency identifications.

“Think of the surprise when an owner suddenly receives bids for items they didn’t know were in the their wardrobe.

“The connected wardrobe is a practical, engaging concept to encourage people to think about their clothing consumption. Ultimately, I hope it will encourage more ethical fashion consumption.”

He also went on to add:

“Perhaps we can even more away from the idea of ‘ownership’ of clothing, to simply using them as long as we need them. When we’ve worn them enough, the items will pass themselves on to their next keeper to wear.”

The idea of a connected wardrobe draws its inspiration from ‘The Internet of Things’ – which is a concept which is designed to get ordinary household objects to connect to the internet so they’re able to share information.

From adjusting your alarm clock to monitoring the temperature of your home, to even setting your kettle to boil at certain times throughout the day – the internet is continually changing the way that we live our lives.

Now, the ‘Internet of Clothes’ will ensure that neglected garments will tweet and text their current owners ‘asking’ to be worn depending on different variables – such as the weather and frequency of wear. Clothing will also keep track of other information as well such as who was the previous owner, who made it, and how much the worker was paid to develop that particular item of clothing.

It’s reported that British shoppers buy 2.15million tonnes of clothing and shoes annually, yet citizens in the UK have an estimated £30 billion worth of clothing that is going unused and is just sitting in their wardrobe.

Another possible reason for this is that we are constantly changing our minds as to what we consider fashion and the clothing that we like. This means that what we consider to be fashionable today might be out of fashion tomorrow and this leads to clothing quickly losing their style and their appeal to you.

One way that you could prevent this from happening is to get custom printed T-Shirts from specialist printing companies who are able to create printed T-Shirts that use your own designs, ideas, and artwork – meaning that these T-Shirts will always be personalised to you and therefore you’re more likely to wear them than just a T-Shirt that you’ve seen many other people wearing.

By doing this, you’re essentially creating your own custom fashion and with that, you’ve got your own personalised clothing that you can continue to wear over and over again – safe in the knowledge that the design will never get old.