The chances are, when you were younger you had a wardrobe full of band t-shirts (maybe you still do!) as they were the ultimate in trendy clothing. A band t-shirt said so much about us, who we were, what we loved to listen to. Band t-shirts are the ultimate way of displaying your personality on a t-shirt – and supporting musical artists we love too!

But are you still wearing your band t-shirts? Or have you found yourself wearing different kinds of design?

TV t-shirts are the new  band t-shirt – many people will tell you! The TV t-shirt could be anything design-wise, we’ve seen famous TV quotes, characters faces, iconic set design or props, names or character names, the list goes on!

Take the sci-fi TV drama ‘Stranger Things’ on Netflix. The sci-fi show set in the 1980’s was a hit immediately and many clothing brands have latched onto it’s popularity by creating clothing lines and t-shirt lines based around aspects of the show. Levi’s released a collaboration on 1 July, as well as Nike, Topshop and Pull&Bear.

TV shows are pulling in huge brand collaborations, and are making production companies and network agencies a lot of money through licensing and merchandise! Where there’s profit there will always be popular!

There are endless design choices

There are so many TV shows out there that have huge fanbases, and most people love and watch more than one TV show. Say you have 3 favourite TV shows, and each of those shows have several t-shirt designs available to you, you’re likely to collect them all! There are so many design choices available, because TV shows have lots of moments, characters and quotes – so you have plenty to pick from, and lots of ways to express your love for the show.

There are plenty of TV shows to choose from

With TV t-shirts you’re not limited to one t-shirt, because you can buy a t-shirt for every TV show you like! Most people will watch 5-10 TV shows regularly, so that’s a lot of t-shirts to pick from!

They express your interests and personality

Wearing your favourite TV show on your t-shirt is a way of expressing your personality and interests for everyone to see. It’s a great way to show people what you’re into, and what kind of person you are – and it’s amazing for bonding with friends or strangers too! Wearing a TV show t-shirt can be a great conversation starter when you’re looking to meet new people too!

Some TV show t-shirts are a little more abstract than others, for example just featuring a single word, or quote from the show. In these cases, wearing a certain line or quote on your t-shirt can be like sharing an ‘inside-joke’ only with other fans of the show. You see this a lot with certain TV shows such as ‘Friends’ or “The Office”. 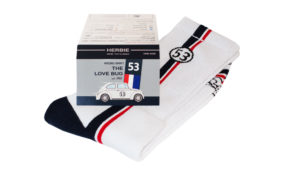 Discover our most sustainable personalised socks, made with textile waste! and AWARD WINNING!

We are proud to announce that these up-cycled socks made with textile waste, currently one of our best-selling sock products, have been awarded the prestigious Promotion Gift Award. The socks, packaged into compostable self seal bags, and can be completely personalised with any design or logo with excellent results. What makes these Up Cycled Socks the most eco

Personalised Facemasks: The perfect guide to help you shop

Here at Garment Printing we’re always looking for the latest trends and new items to offer you within our hygiene range, always bringing the right product for you. Personalised face masks have become essential for everyone and nowadays there are a lot of different options available that we can produce and personalise for your personal project or business activity. These personalised

Garment Printing is proud to be supporting the residents of Whiteley Village, an Almshouse retirement community of almost 400 elderly people in Weybridge, Surrey. Life has been far from normal for those in Whiteley Village, which is the largest group of elderly and/or retired people in the UK, and the current lockdown conditions have been challenging.